The growing support for a mountain bike trail centre development becomes evident after North East Trail Centre Organisation (NETCO) hosted a sell-out film night in the Belmont Filmhouse with over 250 in attendance. 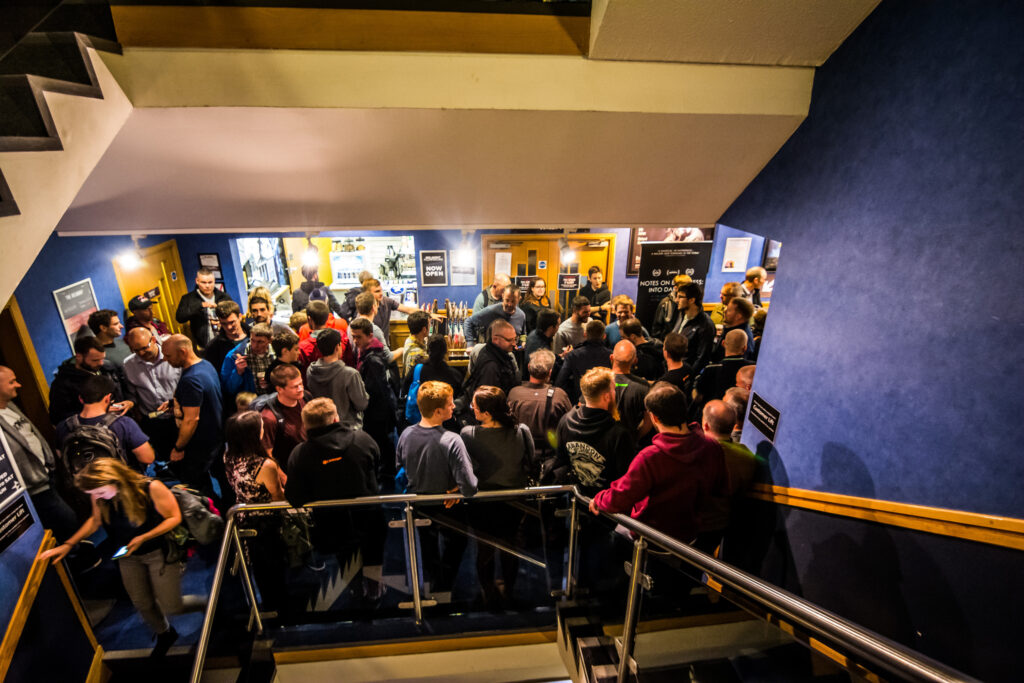 Crowds gather as supporters wait for the doors to open.

A buzz of excitement filled the foyer of the Belmont Filmhouse on Tuesday 5th July as mountain bike enthusiasts of all ages squeezed in the doors to support NETCO and enjoy some mountain bike films on the big screen.

After the event, Martin said

“The generosity of our supporters was incredible! We sold thousands of raffle tickets and received some crazy high bids for the auctions items”. 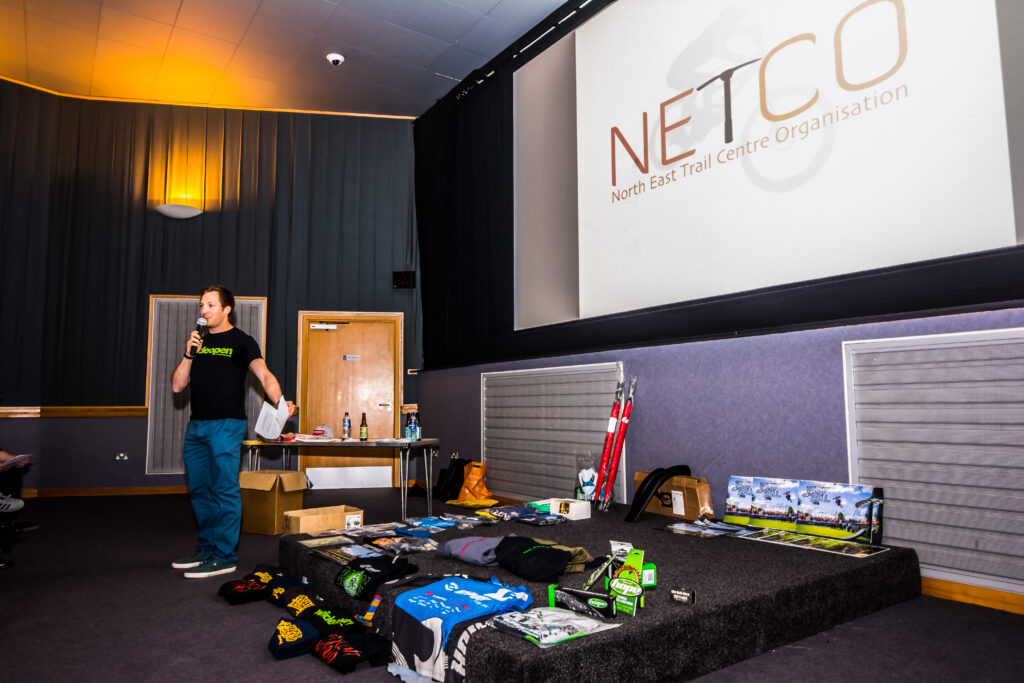 Chris introduces the first film and shows of the prizes.

Over £2000 worth of raffle prizes were up for grabs all thanks to the kind donations from both local and global sponsors. These fantastic prizes undoubtedly helped sell the event and also added to the atmosphere with plenty of banter flowing during the raffle draws.

The majority of films provided the audience with plenty of Scottish cycling action, helping to give a flavour of what to expect with a successful mountain bike trail centre development. Fort William, Dunoon, DH Farm in Banff and the Isle of Skye all looked breath-taking on the big screen.

The aptly named “Slice of British Pie” was up first and definitely set the tone for the evening where viewers were presented with footage from a group of elite level mountain bikers having some fun with their friends, riding hard and crashing even harder. Laughter and empathetic gasps resonated around the cinema as the audience clearly related to the thrills and spills on display – mountain biking in its rawest form.

Other highlights included a short film from DH Farm – a purpose built bike park near to Banff, and two films from the incredibly talented Scottish cyclist, Danny MacAskill in ‘The Ridge’ and ‘Imaginate’.

“They looked absolutely incredible on the big screen” said Chris. He went on to say; “Both of these films just make you want to grab your bike, find your inner youth and explore”.

In addition to raffle giveaways and riding films, the NETCO committee provided the audience with a short update on the progress of the charity to date and opened the floor for questions. The committee were able to discuss the main focus of the huge fundraising efforts – the feasibility study. This study will take a look at four of the most promising areas and help NETCO make tracks in delivering a highly sought after mountain biking trail centre in the North East of Scotland. This will be a modern facility boasting a network of 35km+ of all-weather multi-graded trails for cyclists of all ages and abilities to enjoy. 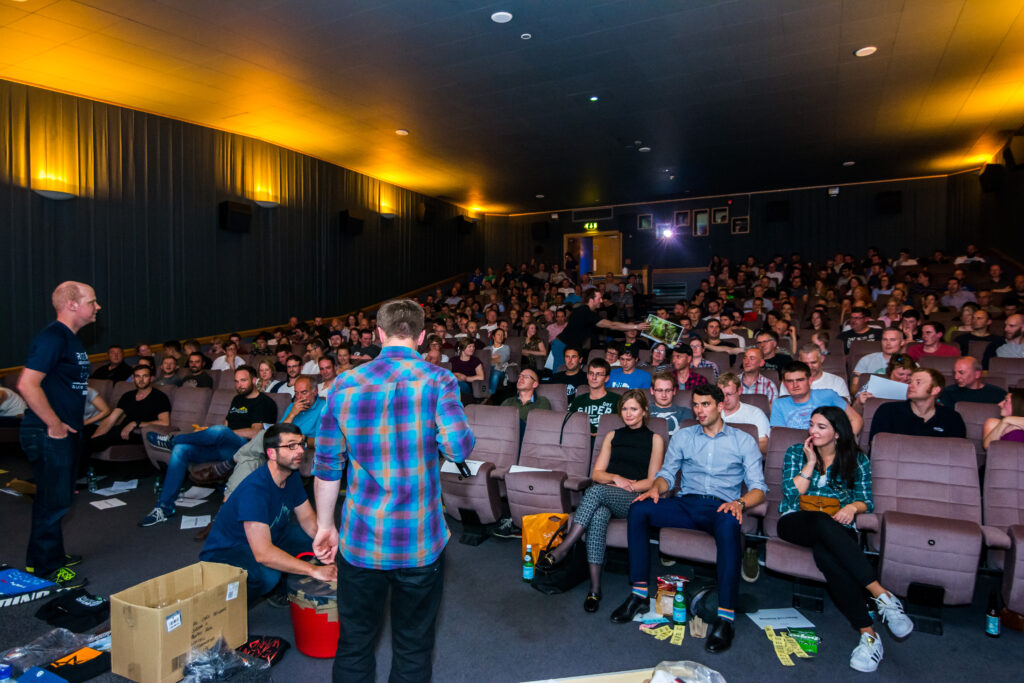 Martin gets the auction and raffles underway.

Plenty questions were put forward to the committee which indicated the high level of interest in ongoing activities –  mostly questions around the shortlisted sites, the timeline and how people could offer their support and help. The key take-away from the committee was that the best way to help would be to continue to donate to NETCO and spread the word. Any donation big or small help NETCO to demonstrate public support for this project and build momentum behind this vision.

The first fundraising night for NETCO was certainly a success and this is furthered by the discovery that the night raised over £3000. This takes NETCO’s total to well over £8000 including the online donations for the feasibility study. NETCO treasurer, Jim MacPhail (a construction industry consultancy Mechanical Associate) stated that;

“The generosity of the North East mountain biking community and the support that has been evident for this project has put us in a great position.  With grant applications also proceeding positively, we expect that we will be able to start a feasibility study later this year.” He went on to explain that “The feasibility study is vital to the project; it will involve a professional trail designer investigating the sites that we have to choose between, and will also confirm the economic sustainability of our proposed trail centre, something that is vital if we are to win the grant funding needed to build the trails.”

We thank you for your time and support in advance.

Some words from event attendees:

“I’m a complete novice when it comes to mountain biking myself, but living in Aberdeen, I’m never far from a friend who loves nothing more than to rave about riding and MTB!  I hopped along to NETCO’s film night to discover what all the hypes about and learn about NETCO’s mission.

And I liked what I saw! I was both entertained and energised. Seeing the riders on screen, I realised mountain biking is not (as I had presumed) a solo sport, serious or scary, but about making friends and making Scotland’s varied and extensive landscape your playground! With that, a dedicated trail centre for the North East gets my vote!”

“It was a fantastic night, awesome fun and great atmosphere, clear to see the committee members are well organised and professional in their approach to this project which will benefit so many in the North East.” 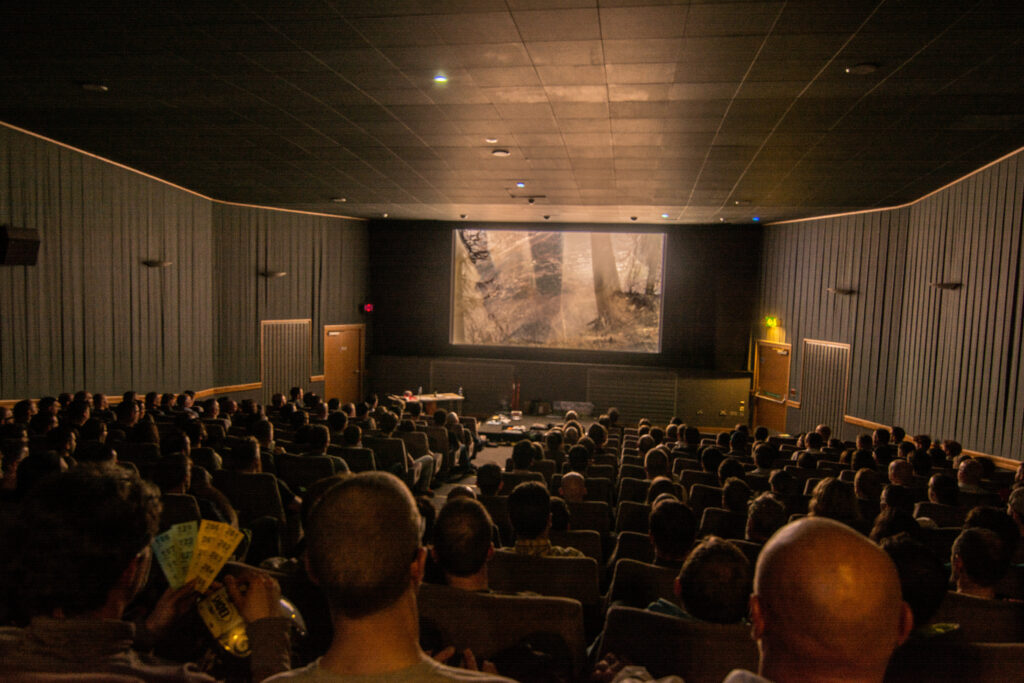 Finally thank you to all those who donated to the raffle!